It's that time of year again when I go off on a busman's holiday.... spending a week at the wonderful venue of Nature In Art as their Artist in Residence from 10th  - 15th September. I am currently preparing for this week and hope to be working on at least one painting that will be for my exhibition for Elephants For Africa. However I shall also have other work there and a small selection of work from my job as the wildlife illustrator at Bristol Zoo Gardens. Please do come along and visit me if you can, I'd love to see some familiar faces and perhaps some new ones too.
Posted by Susan Jane Lees AFC at 18:13 No comments:

I have just posted a few images on my blog 'In the Footsteps of Elephants' about more work I have done towards the exhibition I am doing for Elephants For Africa. Please do have a look.
Posted by Susan Jane Lees AFC at 18:09 No comments:

New posts - In the Footsteps of Elephants

Did you know I had a new blog? If you haven't done so already please check out the new posts I have just added to.... In The Footsteps of Elephants. A new batik has been done for the exhibition and as well as an image of the finished work, there is also a short video of me working on the batik.

There is a permanent link on the right to this blog.
Posted by Susan Jane Lees AFC at 16:05 No comments:

There are just four spaces left for my 2 day workshop at Nature In Art in a few weeks time on Saturday 7th & Sunday 8th September. Wow... that has rolled round quick!

I will show you how I paint with oils and the project will be a lion portrait study... sadly due to health and safety reasons, for the lion (and perhaps the students), we will NOT be working from life. :)

The Gloucester Summer School is organised and run by  Gloucester Arts and Crafts Group and is a week long workshop event at Beaufort Community School, Tuffley. I have been tutoring a 5 day batik workshop with them at this event since 2008. I was booked for 2007 but that was the year of the awful floods and the event was sadly cancelled  due to the extreme flooding and loss of power and water facilities in the area.

The workshops are held over 2-5 days depending on the course and subjects range from working with textiles, painting, mosaics, glass work, batik, drawing, woodwork crafts, sculpting and more.


As usual the school is open the Saturday morning prior to the event for tutors to set up their classroom. And I was very pleased to see that this year I had been given a bigger room, the home economics classroom, which gave me plenty of space for my 12 students. Not only that it had many windows that opened, an outside door and a shaded aspect.

The set up went well and apart from one or two last minute things to do, it was ready for Monday morning.


This year I had more students but they were also spread over the week, some doing all 5 days  a few others only doing 2 or 3. So the maximum number I had in class would be Monday and Tuesday with 10 ladies... 5 of whom had done batik before with me several times and another 5 who were new or who hadn't been for a few years. The set up of the room allowed me to separate them into these two groups so that I could have all the Beginners in one place so that they could all see what I was doing as I took them through the initial stages. The Improvers could get on with their own thing but still be close should they need help/advice.

Due to the changing rota of students I was not able to work on something myself, as I usually try to do at the end of the week. Once I have the beginners and Improvers well on their way (usually by Thursday) with their own projects the frequency of me being needed slows, enabling me to have a play with a 'demo' piece. I like to do this as I think it is good for the students to see me working on something too, it can give them ideas or just see how I work. This year I was to have two new ladies starting on the Thursday. And at the beginning of the week Ann, the organiser, asked if I could take a third lady on Thursday for 2 days. As it turned out, one of the original two tried silk painting at the beginning of the week and quite sensibly decided to stay with it and the third lady also decided to stay on the course she was doing. So I had one new lady on Thursday, who had a crash course, to get her going on her own project and one of the new ladies who was with me all week was struggling a bit with the technique. Sometimes the technique is picked up straight away sometimes not and I think it's just a question of which way your brain is used to working. With batik you tend to work from light to dark putting in the highlights first and building the image from 'the front' to 'the back' in perspective.

It was a busy but fun week. Yet again I had a great group of cheerful ladies, and as always I can't help but be inspired and thrilled by their progress and the work they produce. I love it when someone is working on something and its not going how they thought and they just see where things are 'wrong' and get a little negative about its outcome.... and then they take all the wax off at the end, stand back and look at it and then say.. 'That's come out better than I thought, I like it now.' As in any form of art it's getting the knack of looking beyond the 'mistakes' you think you've made that stand out so glaringly to you and seeing the product of your endeavours as a whole entity and as others may view it. They often won't see that 'slightly pale line that you didn't want to be there', or the blob of wax that you had to change into a strange looking part of your design/image.

I put the work on display and quite often by the end of the week the ladies get to look back on their earlier work with fresh eyes and appreciate all the good things they achieved with it. When they see that they have done well... that makes me happy.

I have selected a piece from each of them, pieces that were my own personal favourites of what they achieved in the week. The diversity of styles and inspiration is always good to see and I am proud to show their work on here. 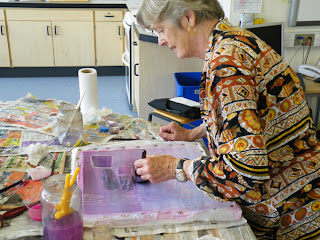 Jan laying in a finishing coat of wax over her design 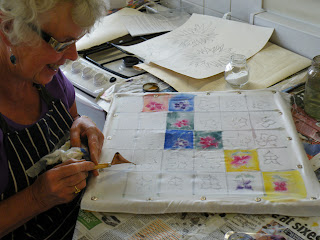 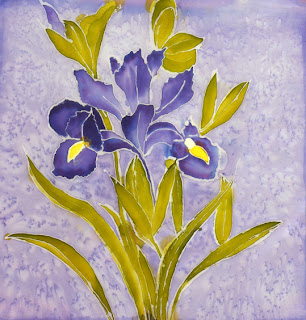 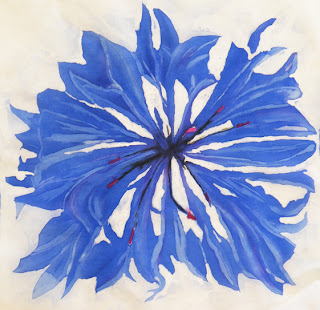 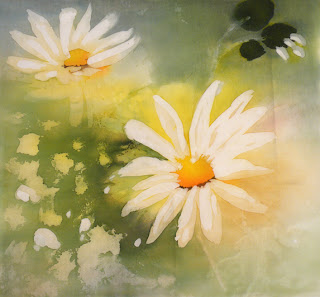 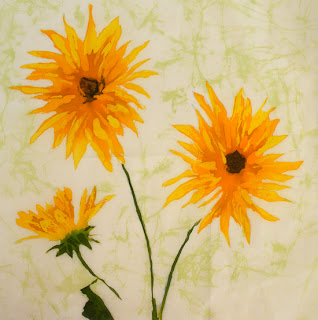 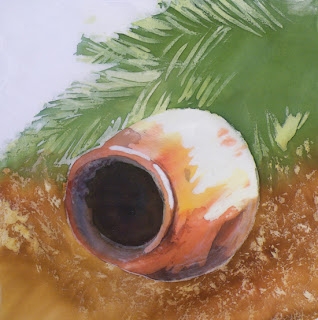 Del's pot (Improver)
This piece is yet to be finished, however I have posted it because I really like where Del is going with this and I feel it could almost be finished as it is. 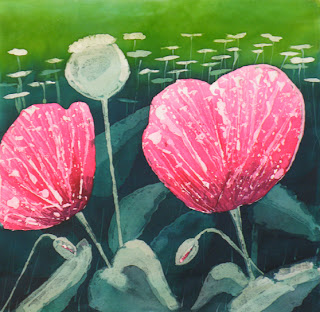 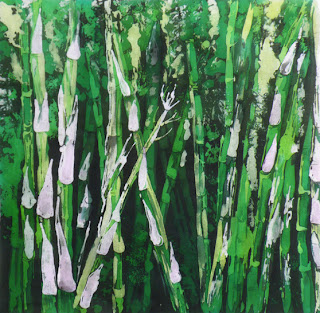 Hazel's Bamboo (Improver)
Designed for a cushion, with (below) the beautifully crackled back-piece 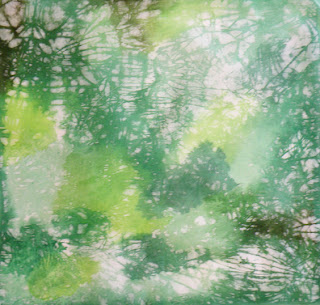 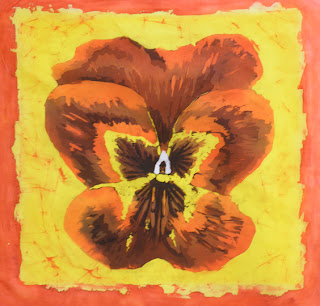 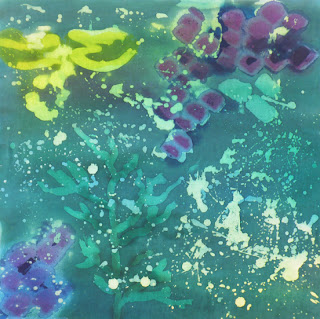 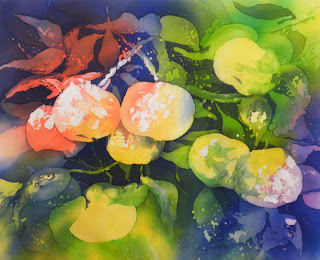 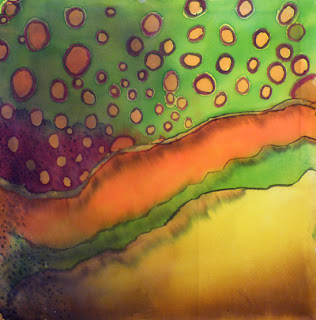 New blog - In the Footsteps of Elephants

I have just set up a new blog and Facebook Page, both are called 'In the Footsteps of Elephants'.
They will both be about the journey I am taking working towards an exhibition of my work to raise funds and awareness for Elephants For Africa.  As both are so new, there is still work I want to do to them to get them 'fully presented', so if you are interested in elephants, their conservation  and art then please take a look and pop back to check on updates of news and images.

Click on these links for the Facebook Page and for the Blog
Posted by Susan Jane Lees AFC at 17:34 No comments:

I have two bits of news to on report today. Both are exciting for me and I don't know which to put first... so I'll go with my new Facebook page first.

'In the Footsteps of Elephants' is a Page I have set up on Facebook to post news and progress of my exhibition project with Elephants For Africa. I have some photos of my time spent in the Okavango Delta in 2011 and some images of the work I shall be exhibiting when the exhibition takes place. I will be posting on the progress of the body of work I am in the process of painting and also news and updates on the exhibition details such as venue and date and other things connected with it. So please visit it and click 'Like' to keep informed of this event.
And for those who want to steer clear of social networking sites, I hope to have a companion blogpage set up soon doing the same as the Facebook Page.

My second bit of news is that Artists For Conservation have given me the honour of being their 'Conservation Artist of the Month' for August. I shall feature on the homepage of their site and on the Conservation Page for the whole of this month. I was most surprised to receive this award but I am obviously over the moon. My dream as an artist is to inspire a sense of caring and concern for our natural world, in the hope that my efforts can directly and indirectly aid those who work hard in the field of wildlife conservation. To be selected for this award brings a sense of satisfaction that maybe I am on the right track.
Posted by Susan Jane Lees AFC at 13:45 3 comments: