When work load allows, once every two weeks, I get to spend a free morning sketching - kinda like my "in-house" training. Recently I got back out in the zoo to sketch some animals. Which as the zoo's illustrator you might not think that was particularly special. However during the busy summer season it's quite impossible to sit in front of an animal enclosure to sketch without either getting in the way of the public or being jostled by the throngs. So during the summer I went out to the Hollywood Towers Estate, which the zoo owns. to sketch landscapes and buildings. Now that the colder weather is here and the crowds have gone, as the schools are in session again, I am back in the zoo for my sketching.

Having spent a wonderful half hour one evening the week before, after the zoo had closed, watching Shiva (Mum) play with the two cubs (Jay and Kaly) I decided the lions would be my first point of call. The two youngsters (they are a bit bigger than cubs now at 9 months old) were lying on one of the high-rise platforms for a bit of warm sunshine snoozing, with Shiva. Kamal was restless as he was due for a feed that day and so he wandered around quite a bit, getting impatient - calling and pacing.

Jay, the young male, was at the front of the platform and in view - sort of. I had to position myself so that I could get an unobstructed view through the trees and bushes to the platform that was right at the back of the enclosure. As I had neglected to bring my binoculars, I had to really concentrate to see his lines and form across the distance. 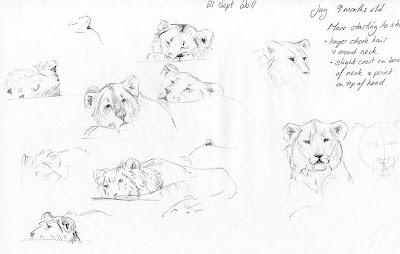 So, rather than work anything up and to get my hand and eye working together, I just did little thumbnails of him, as a warm up.

Kamal finally settled and good old lad that he is, he plonked himself down right in front of me. It might have helped that I was luckily at a place that was a good spot for him to keep an eye out for his keeper and most importantly - his food.

So as he had settled down, I did too and concentrated on two head positions - switching between the two sketches as he moved his head about - one looking for the keeper/food and the other resigned head on paws, eyes closed. 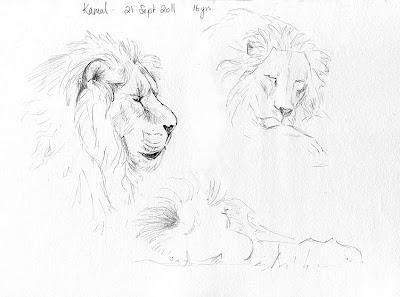 The third sketch was a very quick one (about one minute) done just prior to the keeper turning up where Kamal had relaxed a enough in his vigilance to lie on his side and attempt a snooze. Like they say.. a watched kettle never boils... but as soon as you turn your back. So it was with Kamal... as soon as he got settled to snooze - the keeper turned up!
Posted by Susan Jane Lees AFC at 19:50 2 comments:

Back at the end of July I tutored a week-long batik course at the Gloucester Arts and Crafts Summer School. This wonderful event takes place at around the same time every year and offers about 30 courses of various crafts and arts from 1 – 5 days in length. 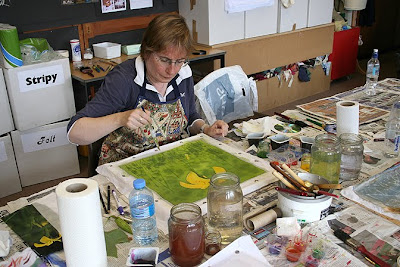 This year I had 6 students attend my batik course -four of whom had been before and two who were new to my class. I was to have 7 students but unfortunately one lady, Joan, fell ill just prior to the week of the course so we were sad not to see her in class again (Joan went to one of my previous batik courses).

I welcomed back Jenny, Del, Hazel and Gill… four lovely cheery ladies who always make the week fly by with their enthusiasm, creativeness and happy banter. Marion and Rita were new to my class and perfectly fitted in with the enthusiasm and fun. What a great week it was…. Lots of work and lots of fun.

I started off the week introducing Marion and Rita to the equipment and technique I use. Rita having done batik before but with a different technique had the challenge of relearning a new way to her. She tackled the challenge head on and with a great attitude. It is always difficult to do such a thing, but Rita persevered and I could see it was starting to make sense to her towards the end of the week. This piece is I think still is her best, despite, sadly, the crackling at the end going a bit dark and somewhat obscuring the main image of the man and camels. I hope she has a go at this one again. 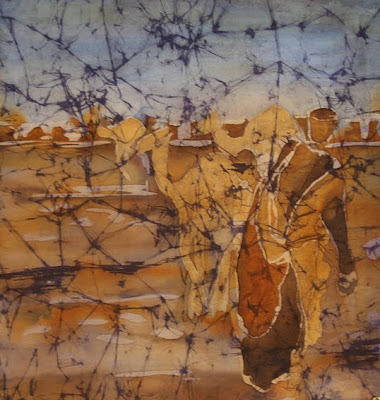 Marion was new to batik, so had the challenge of learning a medium that is like chess….. you have to think several steps ahead and have a plan of attack. This piece of hers has been done with a purpose in mind. It’ll be made into a pennant that will go to the Olympic Games in London. Marion, once she got her head around the technique, got very enthused… so much so that she has since bought the equipment for herself and is cracking on with exploring the fun of batik, at home. 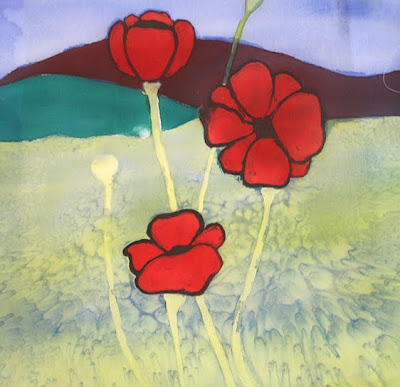 Jenny, Del, Hazel and Gill having all been before or having done batik at home were confident enough to go straight into doing their own designs.

Gill returned to the class having been new to batik last year and also ended up buying the equipment to do it at home after the course. I was very pleased that she brought in a couple of her pieces to show us. She has been doing very well, despite her own misgiving, and has a lovely colour sense. 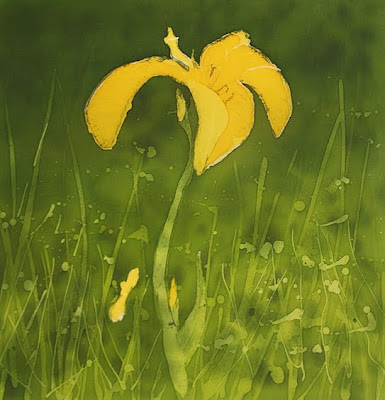 Gill tends to like to start and finish her pieces fairly quickly, the fact that she took time and was patient working on the head of the iris has one paid off. It's a lovely piece with good colour balances and tones achieved in the background.


Hazel was with us for three of the five days, but that didn’t hold her back on producing a good handful of batiks. Having been to my class for four years now and also attending other batik workshops, she has grasped batik fully and produces wonderful work. I particularly loved her sunflower cushion cover this year – such a beautifully executed piece of work.… it makes me feel happy just looking at it. 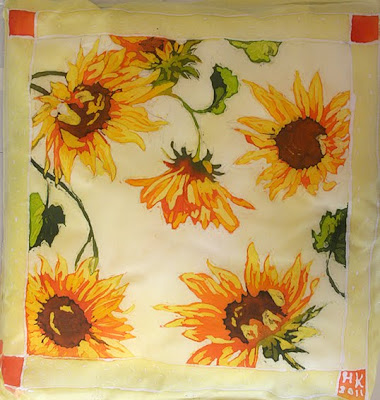 Del and Jenny also have been before for the last four years and again, they are both very productive and creative. Jenny loves to challenge herself and always amazes me with what she accomplishes. She too has a great eye for colour and I was very happy to hear that she has sold a number of the batiks she has previously produced. I chose her Spanish dancer because the effects she achieved on the lace underskirts and the shawl fringes were just amazing. You can feel the swirling of the dress and shawl fringes flying around her. The background is subtly mimicking the dancer too which adds unity and heightens the action of the piece. 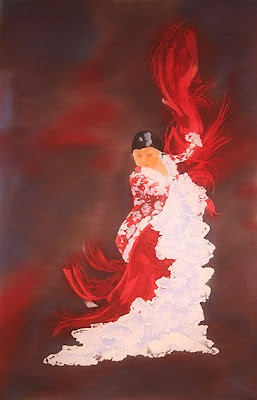 Del is the first to admit she doesn’t have a huge amount of patience, so I was particularly proud of her that she carefully and slowly applied wax on one of her batiks (some flowerheads) to get it right. The result was superb and I hope she was as pleased with the result as I was. However, I chose her pebble design over the flowerheads because I particularly love the colours, textures and feel of this one. I love the wet effect on and between the pebbles - perfect. 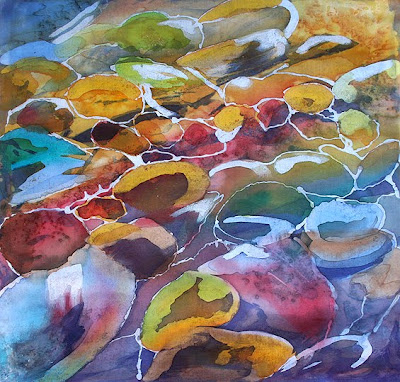 Several Christmas cards designs were also done, and as much as I’d love to show you them as well, I don’t think it would be fair to do so as they may want to keep the designs under wraps til Christmas.

Once again the class produced a wonderful array of finished pieces– they never cease to amaze me with their productivity and creative output. It was, again, hard to pick one from each of them, but I hope they will be happy with my choices. They say the will be back again next year..... If they are, I look forward to seeing what they do then! It gets better every year!

Posted by Susan Jane Lees AFC at 13:50 No comments: