This painting was done so that I could work on it at three demonstrations to show how I paint long and short fur with oils to three different art groups - Thornbury Art Group near Bristol and the Gloucester Society of Artists (GSA) and the Churchdown Art Group in Gloucestershire. It has however now only been painted on at two demonstrations, as some of the people who attended the second demonstration for the GSA were likely to also be at the third (which is next Wednesday) in Churchdown. So I shall be doing something else for them that night.

This step by step is posted, in particular, for those who attended the demonstrations where I worked on this painting, as I thought it might be useful for them to see it through its finishing stages.
For the demonstration I thought a male lion would be a great subject on which to show long and short fur techniques. The lion is Kamal, an Asiatic, that we had at Bristol Zoo Gardens. He died late in 2012 due to old age related illnesses... he was 18 years old... quite an age for a lion. He came to Bristol Zoo Gardens in 2008 and had two cubs with our lioness, Shiva, in 2010 and fathered two more cubs with Shiva prior to his death. His keepers told me he was a gentle lion and loved being tickled or scratched through the wires of his enclosure by them. He was a handsome chappie, with a thick dark mane. He is greatly missed.
This was a copy of a photograph... but embellished in colour as the photo was rather dull and flat.

Recently I have been attempting a looser approach and part of this is not to do a detailed pencil drawing first, but to sketch paint the portrait straight onto the canvas. For this portrait I used burnt sienna greatly thinned with Liquin and a rigger brush. The ample use of Liquin allows the paint to flow much more freely off the brush. I start by looking at my photo and visualising where I can see shapes and lines to help me draw the features. These are quickly sketched in and if I go wrong I just wipe the line away with soft tissue... this smudges the paint so that if I do a lot of wiping away.. the canvas gets a soft burnt sienna hue which adds to the base painting. 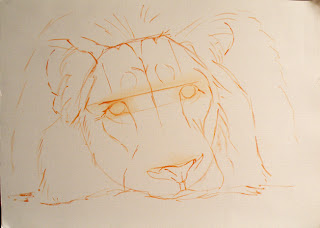 Once I have all the basic elements from which to build my portrait I then check the measurements and proportions. I used the eye as my basic measurement and compared the eye width on the photograph with that of my painting... measuring how many there are, say, from the top line of the eye to the top line of the nose, or the top line of the head, or the total width of the facial area... I check the positions of eyes, nose, ears etc by visualising imaginary lines across the face... e.g. going from the inner corner of the eye down and seeing how far the edge of the nose is from that line and comparing the photo with my painting... I do this until I am happy I have the proportions and positions about right. It is worth taking your time doing this, at this stage, because it is much easier to correct when you have not started applying lots of paint and going into any detail. 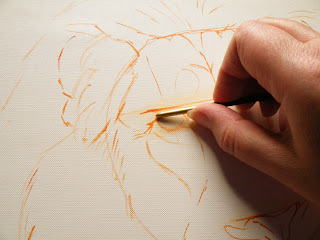 Once I am happy with the basics, I add some detailing to the features. 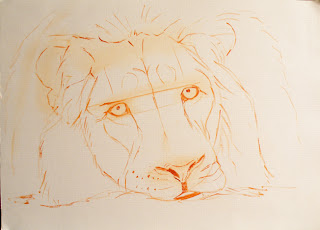 Only then do I start on the full painting. I tend to work from the back of the scene to the front... so I put the background and body in very roughly before I started on the dark part of the mane. I didn't put any detail in the background or body as I want the focus to be fully on the face... and lack of detail in backgrounds etc make the viewer's eyes concentrate elsewhere. I worked wet into wet layering lighter colours on top of dark. A larger brush was used to block in the dark colour and then using a rigger, I applied lighter tones on top to create the fur. 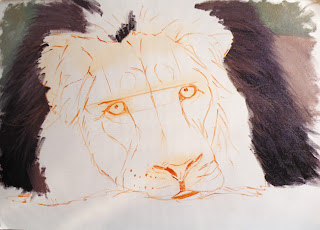 I painted in the ear and blocked colour in on the nose and for the lighter fur to the left side of the face. 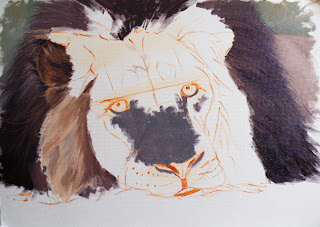 I then used the rigger to layer in light tones for the long fur building up with tones of light browns and creamy colours adding in a few streaks of warming orangey brown tones and pale greyish purple tones for shadows in the fur. Next the eyes were added.... putting in the eyes in the early stages helps me 'create' the character I am painting... almost as if I am creating a relationship with my painted subject - making a connection that gives me some 'inner knowledge' that adds life to the work. Of course, it helps that I knew this lion and had seen him often in the 4 years he was with us at the zoo. It was at this stage that I stopped working on the lion at home, so that I could continue with him at the Thornbury demonstration. 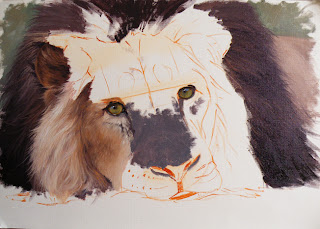 At the Thornbury demo I painted in the fur over his left ear and on the left side of his forehead. I then left it until I went to the GSA demo where I then added in the light coloured long fur to the right of the face and started  on the short fur under the right eye and on the bridge of the nose. The dark grey tone on the nose represents the skin colour under the fur... Kamal had a few skirmish scars and this grey tone will show through the gaps I leave as I paint the very short fur. So this was 'the state of play' after both demos. My plan had been to then do the long fur over the right ear and the right side of the forehead for the third demo, but after being made aware there would be some  of the same folk attending the next demo I thought perhaps they'd like to see me working on something else... otherwise it would be a 'bit samey' for them. 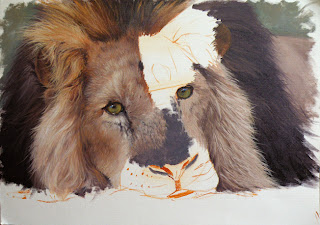 So I continued with Kamal at home..... 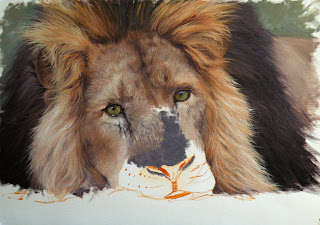 Once the fur at the top of the head was done I then moved my attention to the nose and muzzle. 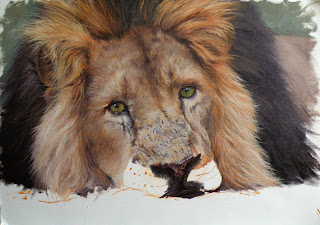 Because this is a particular individual it is important to get the spotting on the muzzle of where the whiskers grow and just to the side of each nasal cavity right.. as these are often used as identification markers... being different in each individual. If you have watched Big Cat Diary you may have heard Jonathon Scott or Simon King refer to these marker as their way of being able to identify individuals, along with other identifying markings.  I did contemplate not painting in the wet fur under Kamal's nose... but that was something he always seemed to have, so as that was him... I had to paint it. 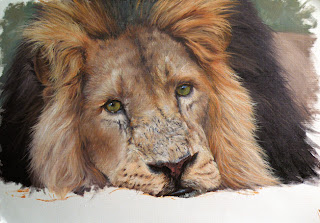 Finally the whiskers were added and the foreground put in. Again the foreground is lacking in detail so that the viewer's eyes are thrown to where I want them to go... the central area of the eyes. Kamal is looking straight at you...and that is the impact of this piece... Kamal lives on. 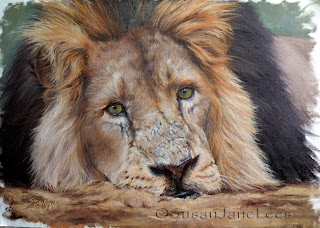 Posted by Susan Jane Lees AFC at 17:42 No comments: